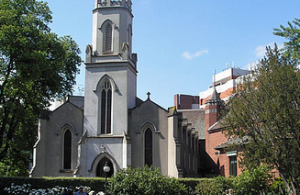 St Peter’s is the oldest Anglican church standing on its original site in the inner city area. The foundation stone was laid by Charles La Trobe on 18 June 1846. The building was first used for services in 1847 even though the first part was not completed until 1848. During the gold rush years, around 400 baptisms and a similar number of weddings took place each year. The building was extended in 1854 to bring its seating capacity up to 1050, much of this space was in galleries that were removed in 1896. The last extensions to the building took place in 1876. The first vicarage (1849) and schoolbuilding stood on land subsequently purchased by the State Parliament in 1884, following which the present vicarage and a new school building (now Keble House) were built